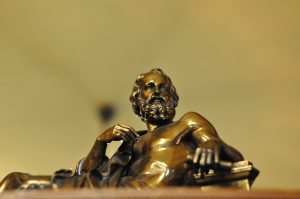 What is the allegory of the cave meant to illustrate?

Plato’s work, The Republic, he shared an allegory of the cave and its relevance to the contemporary ways of living on this world. In this particular allegory, he asserted that the people depicted here are likely the people living on this world right now. The allegory of the caves illustrates the process of acquiring wisdom from basic knowledge and can be simplified and divided into 5 parts – the cave, the shadows, the game, the escape, and the return.

Firstly, the allegory illustrates people living in the cave. The cave here represents the simple environment we are mostly living in our lives. This can be our home, school, or any place where we expose ourselves into. Plato asserts that this environment, together with our senses, is all an illusion and only made to deceive our frail minds and hearts. In this situation, infants are more likely to be compared since they see or touch nothing but the parents and the house alone.

Secondly, it illustrates the shadows seen by the people in the cave. The shadows represent the knowledge the prisoners are filling their minds with. “Such prisoners would mistake appearance for reality. They would think the things they see on the wall (the shadows) were real; they would know nothing of the real causes of the shadows.”(Cohen, 2015) This could be in our childhood days where we learn so little and accept whatever we want to accept, using our own frail minds, which can lead to mistakes and regrets in the long time.

Thirdly, it illustrates the game played by the people in the cave. The game represents the situation where any one of the people exalts someone or something from an empirical point of view. This is where most adolescents fall short into, since they decide on their own and do not really interpret the reality behind that person or thing but instead continues to be amazed and accept whatever fits their perception.

Trumpeter, A. (2012, September 21). ‘The Allegory of The Cave’ by Plato: Summary and Meaning. Retrieved from http://www.philosophyzer.com/the-allegory-of-the-cave-by-plato-summary-and-meaning/

If you don’t know how to start your «The Republic» analysis paper, check out our free sample to gain a better understanding of the matter. You can use this paper as a testimonial, structural template, example of academic style or source of ideas. We remind you, however, that you are not allowed to use the parts of the text without proper acknowledgments, as it will be considered as a violation of the author’s rights. Check out other samples on political science at our blog, and we bet you will be able to create an astounding «The Republic» analysis effortlessly.