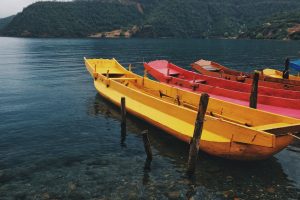 Prologue
The main characters here are Rayona, Christine and Elgin. Rayona is trying to resolve her own identity as a half-Indian and half –Black young woman even though she feels as though she never will fit into either category. Her feelings have alienated herself from her mother and her father and caused self-emotional problems. Toward the end of the first chapter, Rayona recalls being taken to her uncle Lee’s funeral by Christine and now is faced with being taken to her aunt Ida’s on the Montana Reservation. Although she knows that Christine idolizes her uncle Lee, she hates aunt Ida, Christine’s mother and Rayona’s grandmother although it has been 8 years since the two have been together.

A Yellow Raft in Blue Water
This is a compelling story about an American Indian family of women whereas the main characters interact with each other in different ways.

Rayona’s Story
Rayona the main character is cast as a fifteen-year-old girl, the product of a mixed-race relationship. Her mother is Indian and her father is Black. The entire novel deals with her struggle to find a personal identity that helps her realize both her biracial uniqueness and finding a special place in the world that would accommodate her identity.

The Other Members
There are other members that surround Rayona and tend to support her as the story goes on. Some of the most important are her grandmother an aunt to Christine, and Lee who died during the Viet Nam war. This was Ida’s son and Christine’s brother. Two Catholic Priests, Father Hurlbert and Father Tom even though the former is more of a friend to Rayona than Father Tom who makes sexual advances toward Rayona. The story continues with an assortment of varied characters, everyday people that surround Rayona and contributes in a major way to her development.

“One morning while Rayona is doing her rounds at the state park, she notices a young woman swimming near the yellow raft, anchored in the lake. This woman is Ellen DeMarco. Rayona doesn’t draw attention to herself; instead, she draws back because Ellen is everything that Rayona wants to be: beautiful and self-confident.” ( ND) Cliff’s Notes.
“The yellow raft in Bearpaw Lake is the raft of the novel’s title, and it becomes a symbol of the time and place where Rayona breaks her final ties to her old life at the reservation.” (2003) Sparknotes.

We are here to help you with your literary analysis paper if you are stuck! Academic writing can be grueling, but the good news is it doesn’t have to. Check out this sample essay on “A Yellow Raft in Blue Water” to get a better idea how such papers should be written. We remind you that you are not allowed to copy any of the information provided since it will be a violation of the author’s rights. More than that, you know that the uniqueness of such a paper will be close to zero.
If you don’t know where to get inspiration to finish your literary analysis paper, browse our blog for more inspirational articles and writing advice.